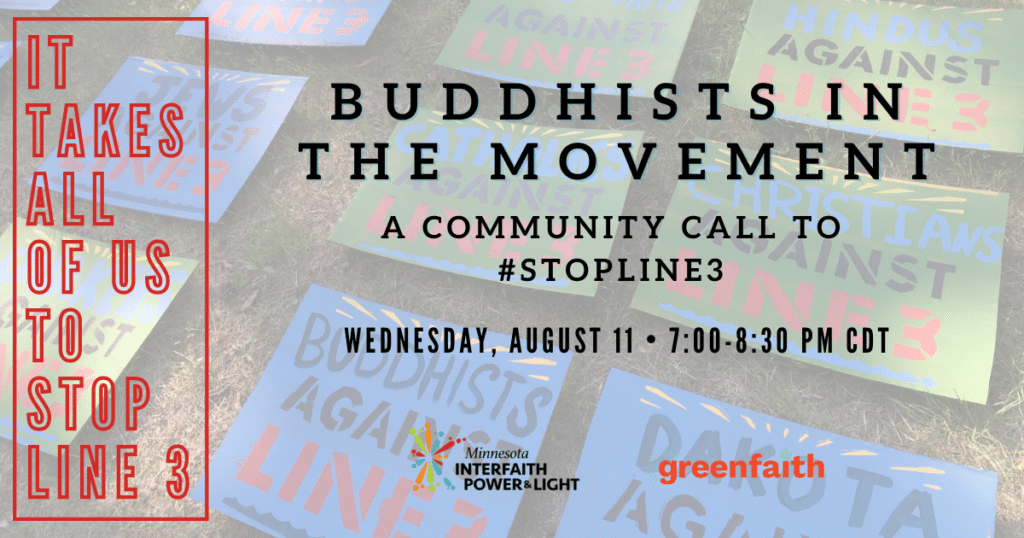 It Takes All of Us to Stop Line 3: Buddhist Community Call

Join three leaders of the Buddhist community as they share their practice of engaged Buddhism and how their spiritual practice informs their work to alleviate the suffering of all living beings and preserve and protect our dear Mother Earth.

Keith Miller is a practitioner in the Plum Village tradition of Zen Master Thich Nhat Hanh. Onryu Kennedy and Ann Schulman practice in the Soto Zen lineage of Dainin Katagiri Roshi. Please read their bios below.

On Wednesday, August 11, we will also share ways we can all show up as people of faith and spiritual practice to resist this pipeline. Although we are called to this movement in different ways, we are all grounded in similar truths:

Join us for this Buddhist community call to engagement, practice, and action.

This event is part of a series of community calls hosted by MNIPL and GreenFaith with leaders from a variety of faith and spiritual backgrounds who are organizing their communities to take action on Line 3. People of all faiths and spiritual practices are welcome to attend, although this event on August 11 will specifically center Buddhist practitioners. It takes all of us to stop Line 3 and build back a fossil free world! See all upcoming Line-3 related events below, including others in this series of community calls.

Keith Miller has been practicing in the Plum Village tradition of Zen Master Thich Nhat Hanh since 1991. He was ordained into the Order of Interbeing in 2017 with the Dharma name, True Liberated Dwelling. Keith worked nearly 40 years in environmental engineering/management and sustainability, mainly at 3M. He has been engaged in the Earth Holder Community in the Plum Village tradition since 2015 and became a Regional Community Builder in 2019. His Earth Holder practice involves deepening his mindfulness and using his professional experience to work for Earth justice.

Onryu Kennedy was ordained in 2012 and received transmission in 2018 from Byakuren Judith Ragir in Katagiri Roshi’s lineage as Zen priest. Currently, she is participating in a year long engaged Buddhist program at Upaya Zen Center. Onryu has been committed to social justice issues in her 22 years as a social worker. She has supported Indigenous leadership in providing bearing witness retreat at Fort Snelling. Educating white people about the ongoing genocide in relationship to place, water and treaty rights. She has been to Standing Rock and has supported Indigenous leadership against Line 3. Her engaged practice is not separate from her spiritual practice as a Zen Priest.

Ann Schulman is a Healing Touch Certified Practitioner and works with the dying with Our Lady of Peace Hospice in St. Paul. She also has a small private practice in her home. Ann has been a playwright with shows at the History Theatre, Seattle Children’s Theatre, Stages and Steppingstone Theatres. Before being a playwright, she was an actress and lived in New York City. Ann is grateful to the Indigenous leaders and communities for role modeling patience, fierceness, truth, justice, generosity, and kindness and for all their hard work. May we wake up to a sustainable future together.