Enbridge has finished construction of Line 3 and oil can start flowing, but we know this movement goes beyond a single pipeline. We are fighting for the end of all fossil fuel projects. We are fighting the scourge of racism because we know that's what makes climate destruction possible.

We continue to show up in this movement because we are guided by the deepest values of community and care. We show up because we share a collective imagining of a world based on renewable energy, equity and prosperity for all.

Together, we are powerful beyond measure.

Water Protectors are actively on the frontlines to defend the water, land, climate, and wild rice. Follow our partners on social media for real-time updates and specific opportunities to get involved.

Build Back a Fossil-Free World

Write letters to the editor of your local papers. Get guidance and resources.

Call on the banks funding Enbridge to #DefundLine3.

Host a watch party of Honor the Earth’s film, LN3: Seven Teachings of the Anishinaabe in Resistance. This 38-minute documentary is a great way to introduce your community to the pipeline. MNIPL will help equip you with tools to facilitate a dialogue that leads people to action.

MNIPL has practical tools you can use to educate your faith community about the pipeline resistance movement and can help coach you to bring up this divisive topic in a way that leads to change and deeper relationships. Contact [email protected]

Information & Stories from the Movement

Hopeful resistance has been abundant throughout the long 7-year public process to Stop Line 3. Despite the deplorable inactions by state and national officials, resistance to all pipelines and fossil fuel projects continues!

Inspirational Stories Throughout the Resistance

The stories below are just some of the ways this movement has brought healing, hope, and community to our region.

Marianne Comfort, a justice coordinator with the Sisters of Mercy of the Americas, shares a powerful reflection that can help us feel the anticipated grief we might feel at the loss of a treasured body of water or patch of land and all the life it holds. And how that can spur us to protective action.

On Aug. 31, 63 state and federal electeds delivered a letter to Biden asking for "urgent intervention to protect Indigenous sovereignty amidst the construction of the Enbridge Line 3 pipeline in northern Minnesota." Read the letter, Star Tribune coverage, and Rep. Ilhan's tweet.

Soto Zen priest Ben Connelly, an MNIPL community leader, shares why we must listen to the call from Indigenous leaders to stop Line 3 in an article he wrote for Lion's Roar, published 8/10/21.

Faith leaders are preaching about Line 3, the need to divest from fossil fuels and to honor the treaties.

MNIPL's North Minneapolis Youth 'N Power Team delivered an Amicus Brief to Attorney General Keith Ellison at the Minnesota State Capitol on Tuesday, June 1 demanding a stop to the destructive Line 3 oil pipeline. Read the amicus brief and the press release. Plus, check out the Facebook video of the press conference!

Get educated about how Minnesota's Department of Natural Resources has allowed Enbridge to move 10 times as much water as originally approved. That's 5 billion gallons of dewatering during a drought! Read a 4-page fact sheet.

The Minnesota State Bar Association explored structural bias and racism within the law in the context of Line 3. Part 1 examines the agency approval process and the role of the public in that process. Part 2 explores the racialized impact of that facially neutral approval in the context of MN's legal history.

Over 370 groups from the United States and around the world, including MNIPL, sent an open letter to President Biden, urging him to stop Line 3 by suspending its improperly issued federal permits. Read the press release and full letter.

On April 1, 2021, Indigenous youth and organizers from the frontlines of the Line 3 & Dakota Access pipeline fights traveled to the White House to demand President Biden #BuildBackFossilFree and stop these climate destroying projects. Watch and share the video about this youth-led action.

Giniw Collective and allies have pushed forward direct action along the pipeline route, at Enbridge offices, and at the biggest banks in the world, pushing to stop the tar sands once and for all.

Youth have taken to the streets and to the banks to Stop Line 3.

Ordinary citizens have been speaking up in public hearings for years, even through a global pandemic.

The Missing and Murdered Indigenous Peoples movement has brought international attention to the disproportionate violence and injustice perpetrated against Indigenous women, which is linked to large construction activities like Line 3.

A group of 13 young people (under 25) are legally intervening as a party in the case to stop Line 3, representing themselves in a room full of lawyers.

On Sept. 28, 2020, MN350 and 1,200 people from all corners of Minnesota, as well as many neighboring states, came together in Duluth for the Gichi-gami Gathering to Stop Line 3

More than 400 religious and spiritual leaders signed a letter calling on government leaders to rein in law enforcement responses to the inevitable protests against Enbridge Line 3. (August 2020)

Winona LaDuke and Bill McKibben sat down in April 2020 for a discussion about Line 3 in light of the collapse of the oil industry during the COVID-19 pandemic.

A group of Indigenous youth fighting Line 3 went on a 250-mile canoe journey to stand for the water. (July 2018)

At the Public Utilities Commission meeting in June 2018, 550 faith leaders said no to Line 3. They then gathered at the Headwaters of the Mississippi for an interfaith prayer gathering to Protect Sacred Water. In February 2020, many returned to the Minnesota Capitol to pray for that same water in the Governor’s Office.

An Indigenous Leader on Why She Still Needs to Protest Pipelines, Even Under Biden (Slate, 7/28/21)

Clash at historic Minnesota pipeline spill leads to charges: Water protectors gathered at the site of a 1991 oil spill that was the largest inland oil spill in the U.S. (Indian Country Today, 3/3/21)

The Energy 202: The pipeline fights are only beginning for Biden (Washington Post, 1/19/21)

WHO IS IN THE FIGHT 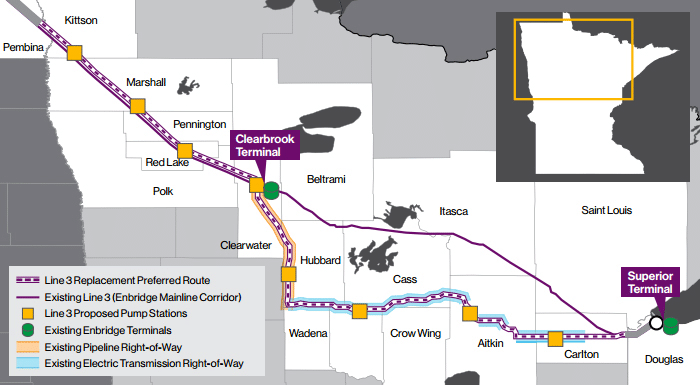 The Line 3 Expansion is a massive new tar sands oil pipeline constructed by Enbridge through the heart of Northern Minnesota. Once completed, the pipeline can move 760,000 barrels per day of oil (bpd), an amount similar to Keystone XL (830,000 bpd) and the Dakota Access Pipeline (570,000 bpd). Line 3 crosses over a hundred waterways in Minnesota alone, including the headwaters of the Mississippi River. It also passes extremely close to the border of multiple Native nations and across hundreds of miles of treaty-protected land: land that those communities depend on for drinking water and wild rice gathering.

Enbridge is a Canadian company that owns a large share of the Dakota Access pipeline and is responsible for two of the largest inland oil spills in US history: 1991 in Grand Rapids, MN and 2010 in Kalamazoo, MI. Enbridge refers to this project as the “Line 3 Replacement,” intending for it to replace an existing, aging pipeline also called Line 3. However, this is no mere replacement: the new Line 3 would have more than double the capacity and follow a largely different route.

Visit Mapping the Black Snake for a visual representation of the pipeline and context on the fight.

In order to build the pipeline, Enbridge needed a number of permits and the approval of the Minnesota Public Utilities Commission (PUC). In June 2018, the PUC unanimously approved the pipeline project, ignoring the legal arguments concerning treaty rights and climate change, and going against the concerns of 68,000 public comments (fully 94% of the public comments). More than a year after this approval, on November 30, 2020, the State of Minnesota granted the final permits for construction of the Line 3 pipeline. But the fight is far from over.