Second Annual Gathering at the Headwaters

Following the Global Climate Strike, MNIPL, the RISE Coalition, and Honor the Earth camped out by the Headwaters of the Mississippi River for our second annual weekend-long community Gathering and prayer circle. Some of us packed up our bags and drove up in the afternoon right after the strike on September 20th, setting up tents by the light of dusk or headlamps. Others trickled in Saturday, September 21st in the morning and early afternoon. Early arrivals had the opportunity to tour Winona LaDuke’s Hemp Farm, where they learned about sustainable economies and the many beautiful uses of the hemp plant. 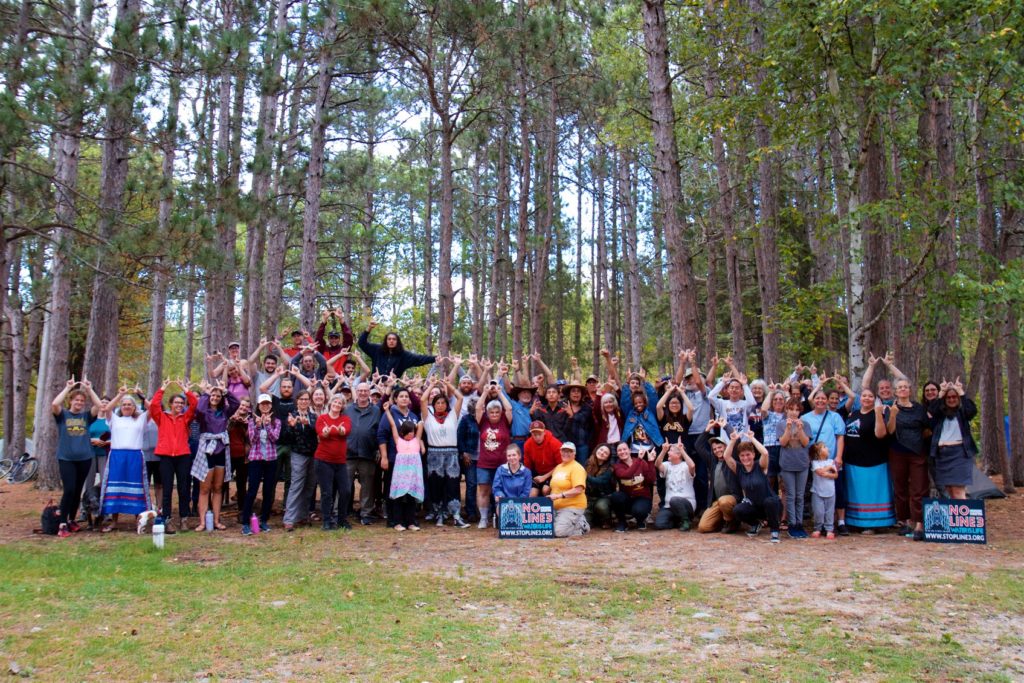 The Gathering officially kicked off with an opening from Winona LaDuke and Honor the Earth to debut the Welcome Water Protectors campaign. We heard about the importance of recognizing our own responsibility and power to protect our life source. Winona brought the same message to us that she called out six years ago in a piece she wrote about Keystone XL: “Someone needs to explain to me why wanting clean drinking water makes you an activist, and why proposing to destroy water with chemical warfare doesn’t make a corporation a terrorist.” 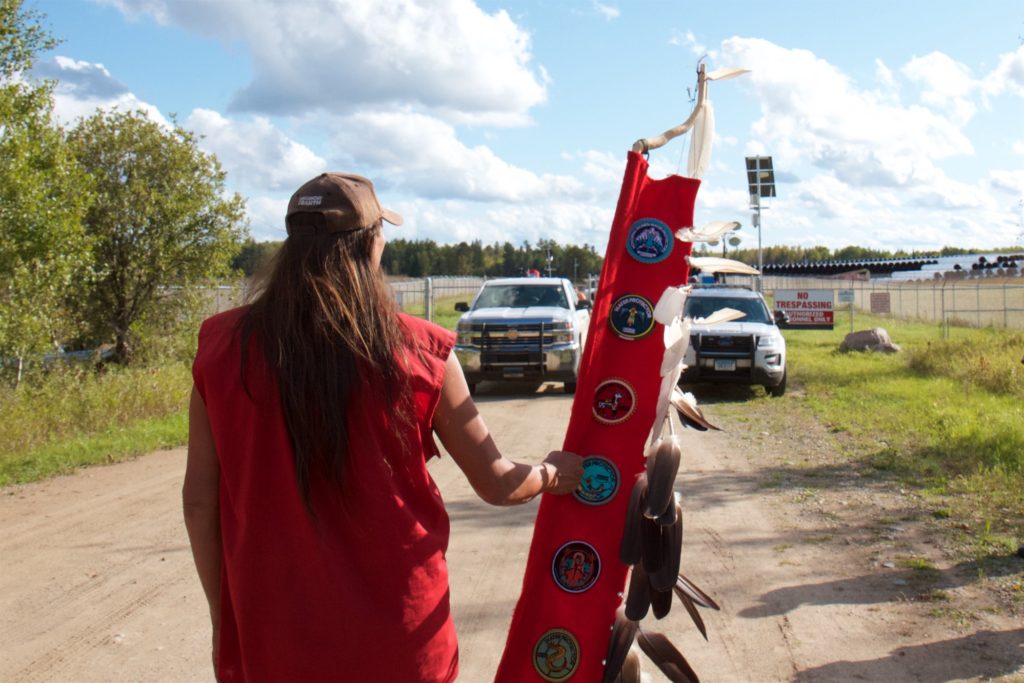 We were invited to join Honor’s efforts to promote “Water Protector Tourism”, which we got a taste of ourselves during our afternoon visit to the Lake George pipeyard. This is one of the sites where Enbridge is beginning to stockpile pipeline materials, located just miles from the Mississippi Headwaters, despite their lack of legal approval to move forward. We brought water protector spirit to the pipe yard, posing for a group photo. 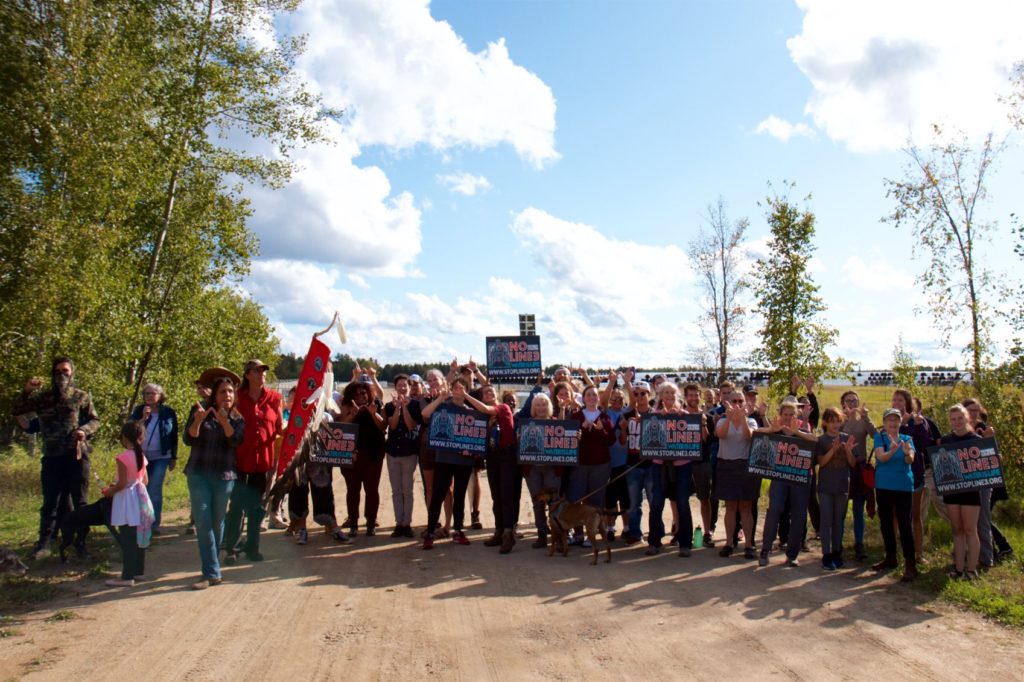 After getting a good hard look at the massive scale of pipe storage Enbridge has set up for this unpermitted project, some of us embarked on another tour of Upper Rice Lake with Dawn Goodwin to learn about the sacredness of manoomin, while others made their way over to Winona’s wild rice processing plant. 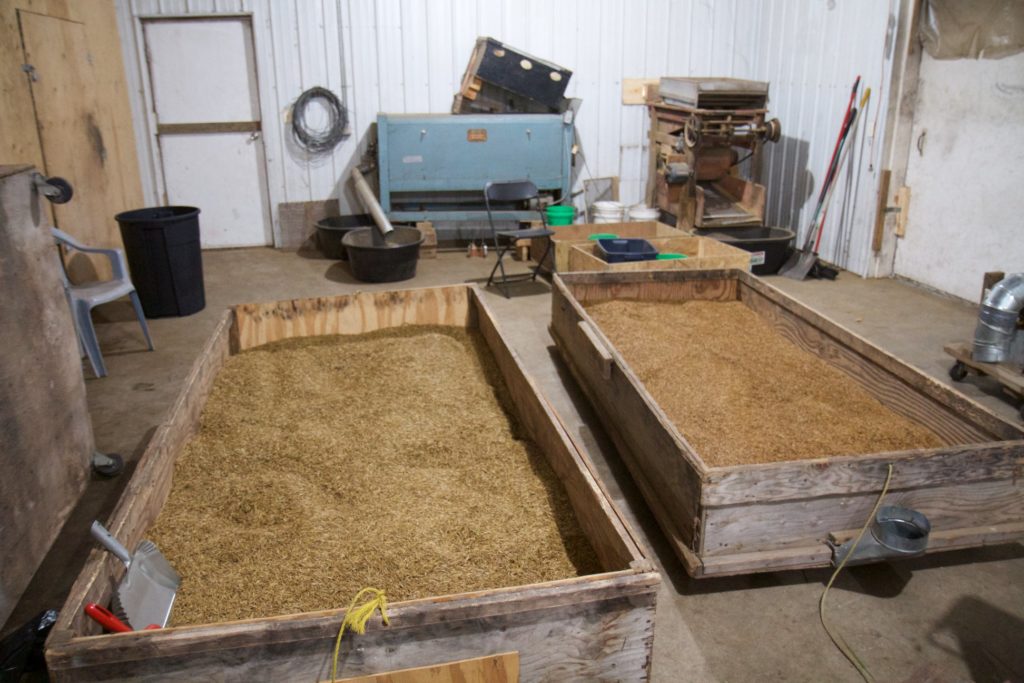 In the evening, we gathered in community over a hearty pasta dinner cooked by a handful of wonderful volunteers, whose help we are extremely grateful for. As the evening set in, we heard from Bob Shimek about the history of treaties and the importance of upholding our treaties as we continue to fight extractive and exploitative forces on Indigenous land. Though passing storms took out the power for the entire state park, we listened on by flashlight to Bob’s wisdom and teachings.

As the night settled, folks headed to have leisure time by campfire or to their tents and cabins. Sunday morning, we woke up early to a lovely pancake breakfast and a crowd of beading dragonflies and bees led by Nancy Beaulieu. We then headed over to the Mary Gibbs Center parking lot by the Headwaters for a rally with art holding messages about respecting our treaties and saying no to Line 3. We were honored to be joined at the Headwaters by some of the elders from White Earth at Dawn’s invitation. 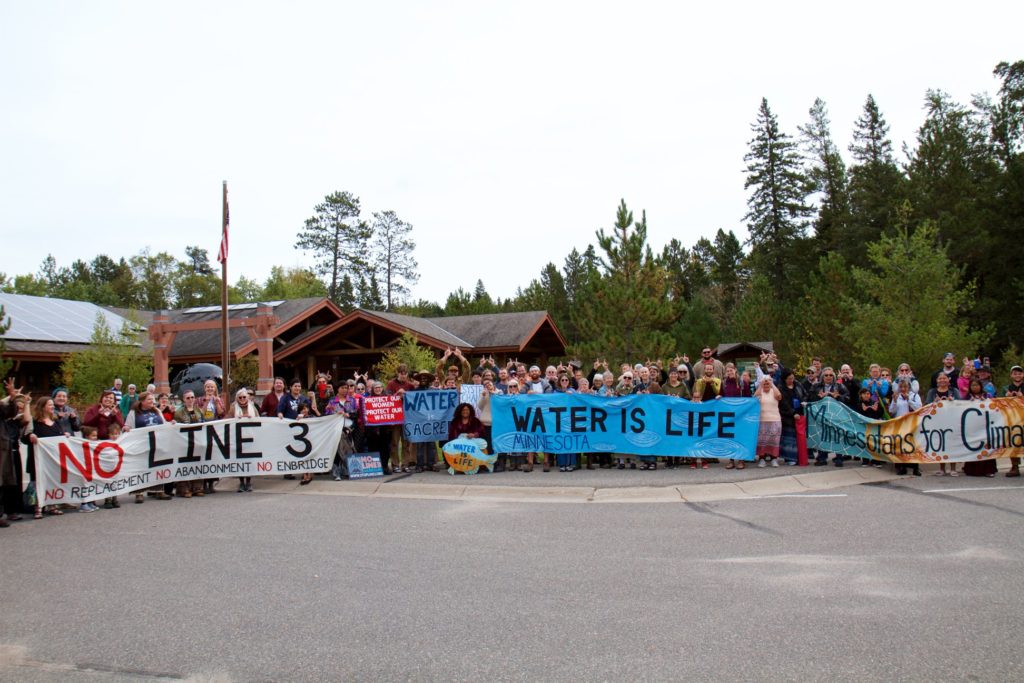 A young drummer, Waabinoo, welcomed us and walked us down to the Headwaters itself at Lake Itasca, where we gathered for a beautiful interfaith prayer circle. After a few songs, Dawn opened us in a grounding prayer for the water, the land and the life that depends on it, as well as to honor the ancestors that have brought us here and the future generations that we are fighting for. 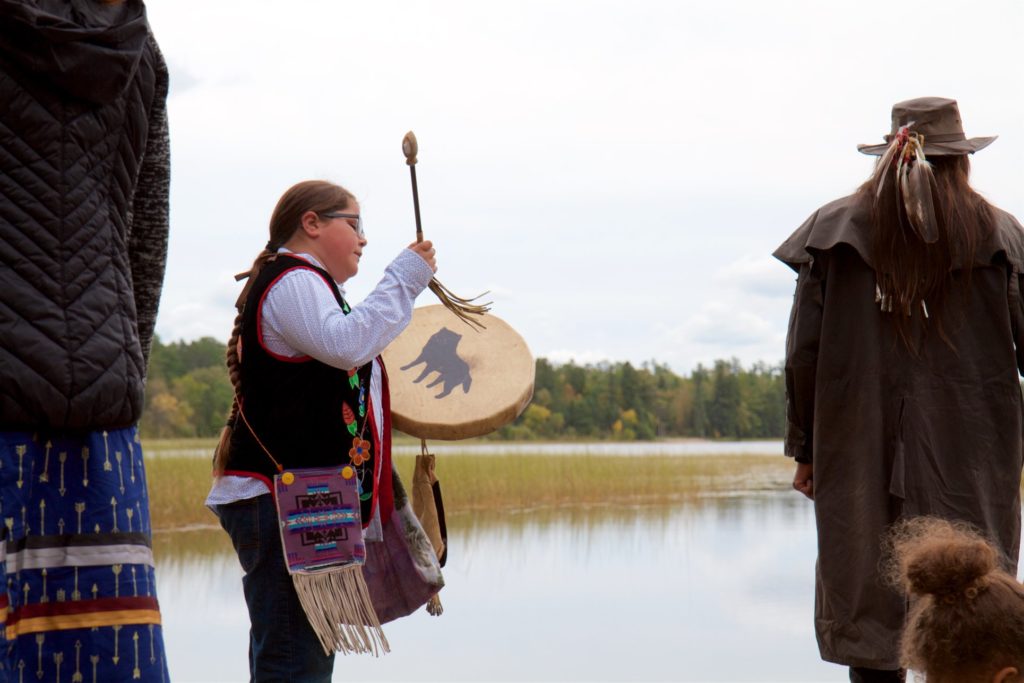 Following Dawn, Gandhi Mahal’s Ruhel Islam opened us with the adhan, the Muslim call to prayer, for which he stepped into the very waters we were praying for. 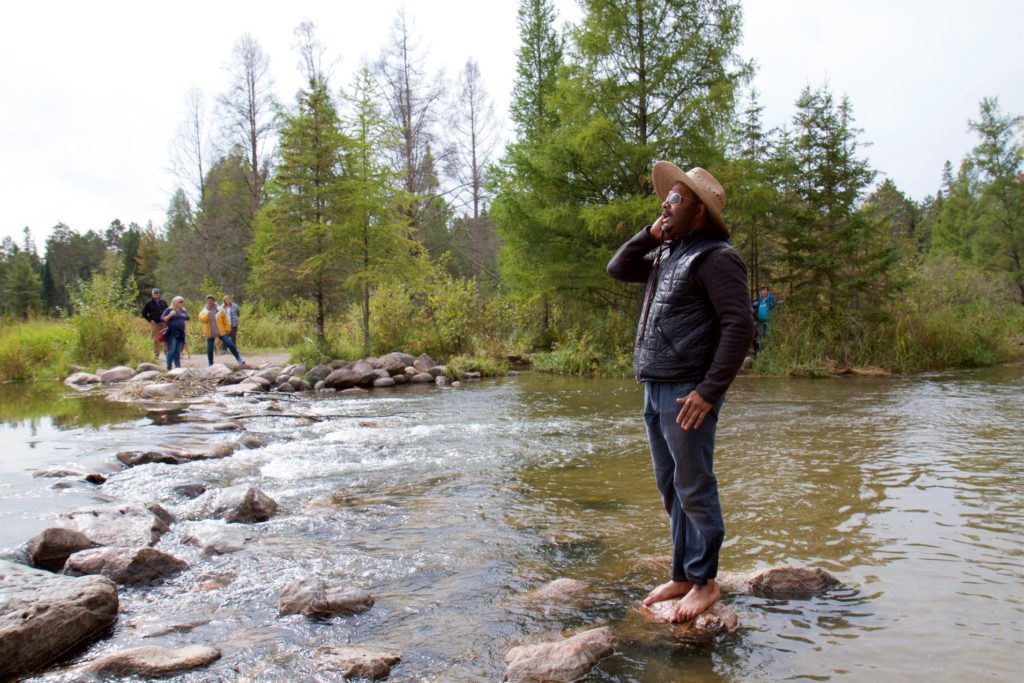 Following Ruhel, UU Minister Karen Hutt offered a sacred witness to the long, intertwined histories, struggles, and resilience of African Americans and Indigenous people on this land. You can revisit her powerful words here. 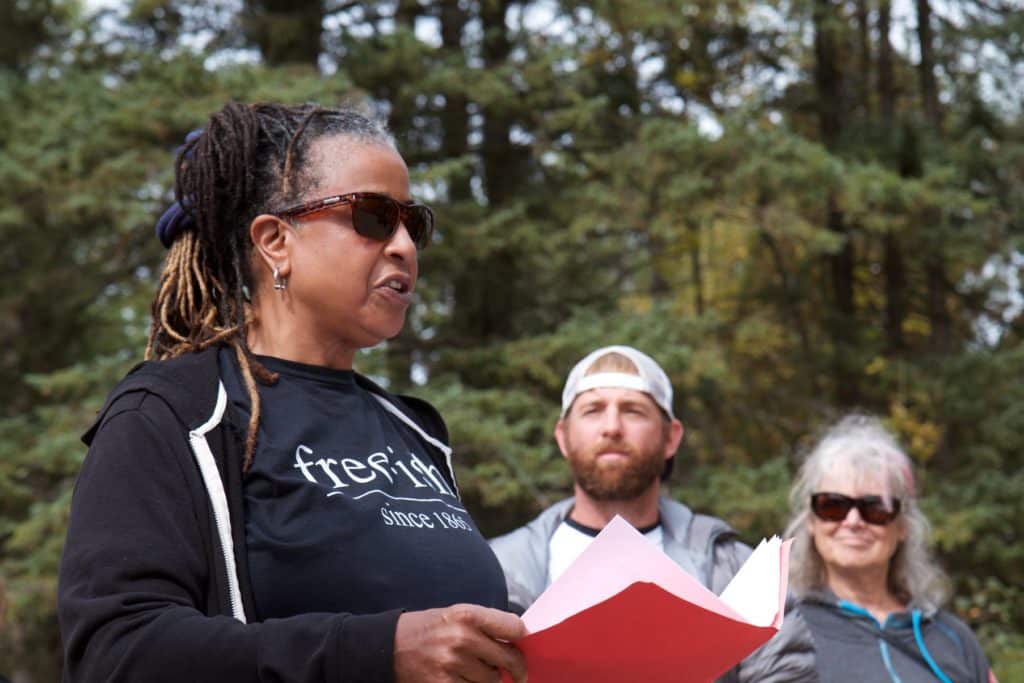 Then Shir Tikvah’s Khesed Bein offered us a song about the vibrations of life and love through all living beings. Their song brought joy and humble celebration to our offerings to the water. 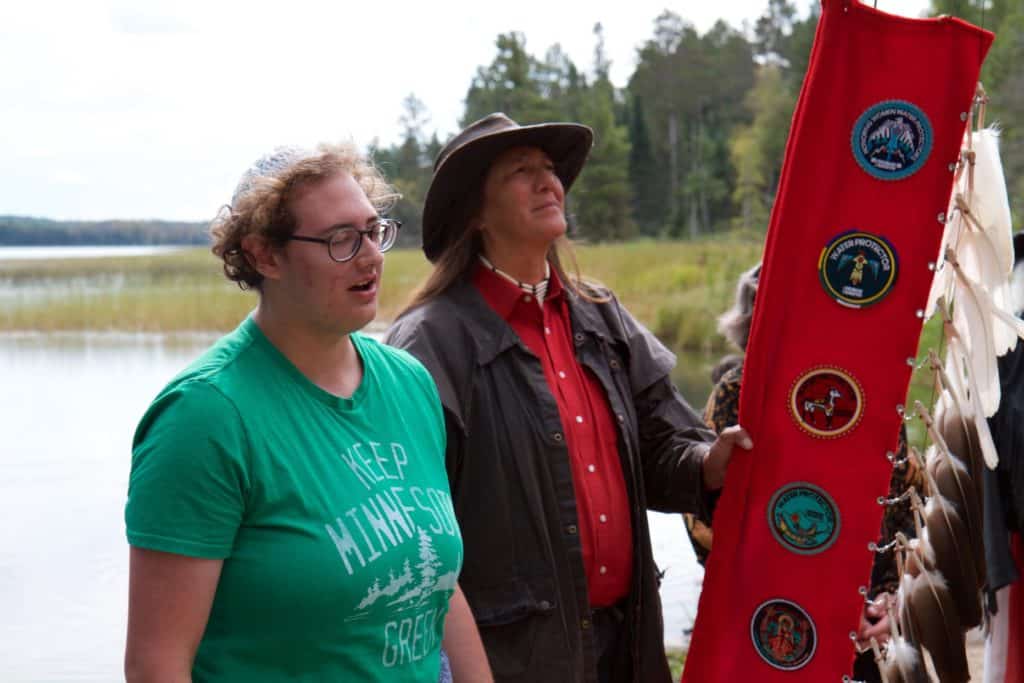 Following Khesed, our very own Joe Meinholz delivered a serious reflection of repentance for the horrors of Christian history in colonizing this land, as well as a powerful message of hope and faith in the arc of history bending toward justice as it is told in the final passage of Revelations in the last chapter of the Bible. 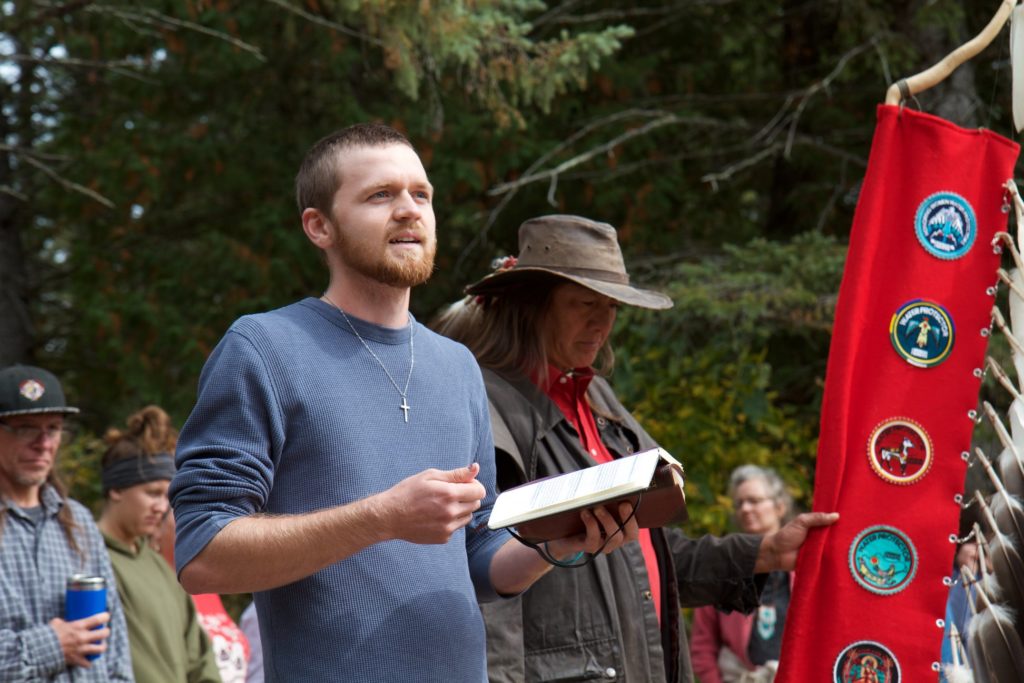 Zen priest Shodo Spring began with a Buddhist perspective on responsibility to remembering our place in the world as interconnected beings, all tied to the same life source. She then offered a song to the circle that allowed space for us to internalize the many messages brought to us that day. 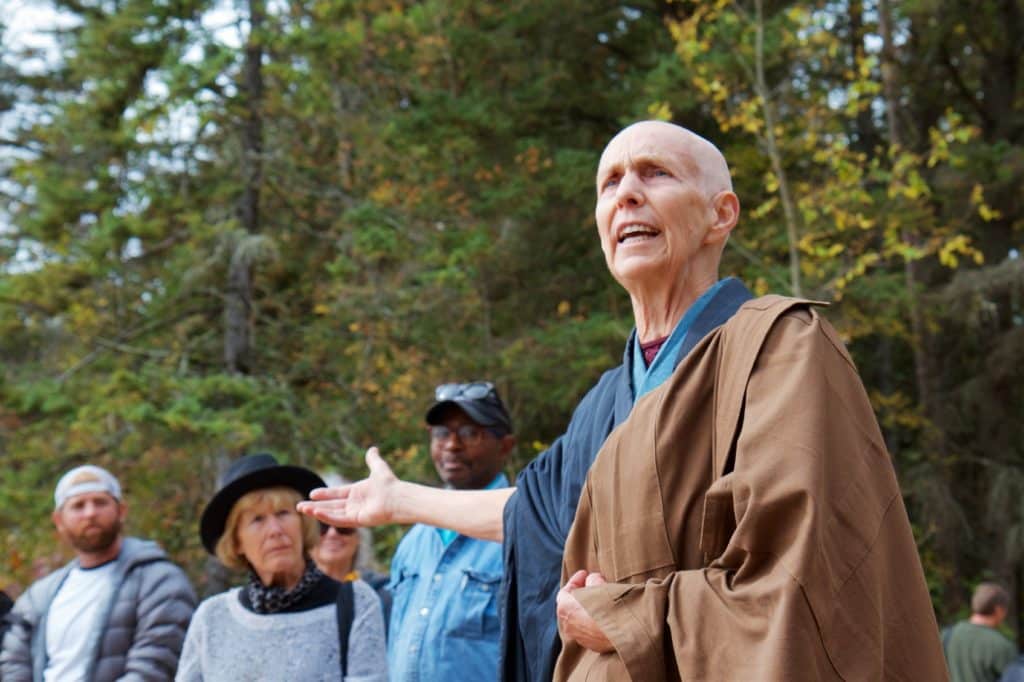 Finally, Dawn closed us out with the Nibi song and we offered our final prayers to the water. We took some time to be with the water and with one another after holding this deeply sacred space, and some of us returned to the camp for a wonderful feast cooked by Dawn and Sherry from the RISE Coalition. We left camp with our spirits nourished and our hearts full, and onward we walked in our journey to honor and protect all that is sacred. 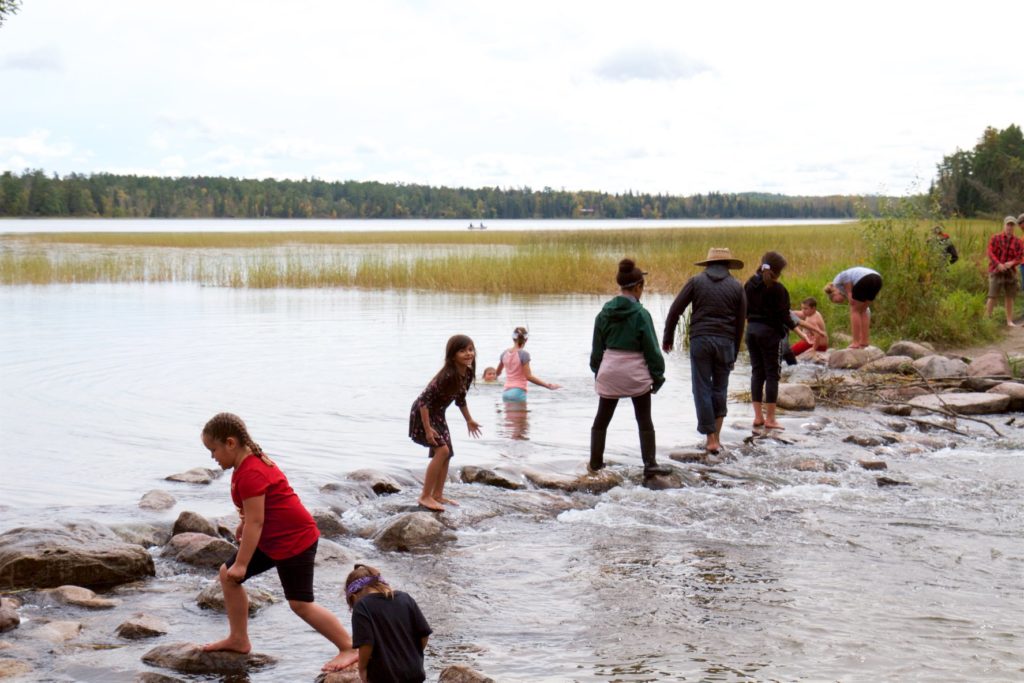 Real-Life Draculas and the Significance of The Moment